My Mom has been with the Lord for just a little over six months now. The first month after she left us, was the hardest time I’ve ever gone through. But as they say, “ time heals” and the days got a little easier and easier. They also say that grief comes in waves and now I know that first hand. Eventually the waves comes further apart and not quite as hard. I missed her on Thanksgiving and Christmas. And her birthday was tough too but none of the holidays have been as hard as Mother’s Day. That wave came crashing almost as hard as those first days. It knocked me off my feet and I felt like I was right back to the beginning. I was so blessed to have her here with us on the farm for the last twenty five years. I was able to spend every day with her. At the beginning of last year, I could see her really starting to fail. In March I quit my job and was able to spend every minute with her. I don’t regret one second of those six months. As hard as it was to see her getting weaker and weaker, I’m so happy that I was able to be with her. But the down side of that, was I spent every second with her and when that is suddenly gone, it feels like you’ve had the rug pulled out from under you. I have really struggled and yesterday I truly felt it again. What I wouldn’t give to hug her. To hear her voice. To hear her yell my name. To laugh at Andy Griffith or Barney for the thousandth time. To sing the Bonaza theme song with her. To watch Gunsmoke for the millionth time. To hear her tell me to never get old because it’s no fun. To cook for her. To give her a bath. To wash her hair. To pick out her clothes. To bring her flowers. To bring her a newly born baby from the barn. To hold her hand.....just one more time. 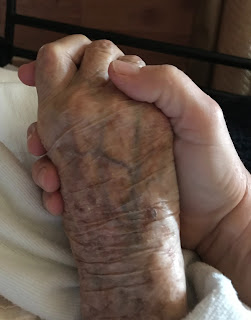 ...choose you this day whom ye will serve...but as for me and my house, we will serve the Lord.

Be thou diligent to know the state of thy flocks, and look well to thy herds.

And thou shalt have goats' milk enough for thy food, for the food of thy household and for the maintenance for thy maidens.

Wool drying by the fire

Herbs drying in the kitchen

Some of the girls

Joe Pye weed in the garden

The one that started it all

Rainbow over the pasture